Back in the 50s before any of us were born Texas A&M beat us 3 times but we have won the last 2 games and even the series Saturday CBS 3:30 game again. Welcome back to Athens aggies – just not real welcome.  13-17-1 vs LSU we have some work to do with them too.  But this is Texas A&M week.  I want this game against Jimbo Fisher.

Penalties Texas A&M is way worse than even us while Kirby remains a totally far too penalized team at number 46 UGA and Texas A&M # 58.

You watch a play and expect a penalty to be called.  That is how bad # 58 penalties against # 46 penalties game is.

With Texas A&M ranked # 24 this 2019 season so far there is no rest for the weary.  It is quite the tough schedule gauntlet UGA Georgia Bulldogs have EVERY year.

No one plays a schedule like that especially not Clemson and Ohio State.

Clemson and Ohio State are the other 2 teams in the playoffs.  They should be REQUIRED to play each other as a play-in with those schedules of pussies they played by direct comparison to Kirby’s schedule of beating 5 of the top 25 teams 2019 just to get into the play-offs.

Texas A&M is not going to upset any applecart 2019.

Texas A&M are penalized too much undisciplined football have an ok defense and a sorry easy schedule of cupcakes with 3 good opponents so far all 3 of whom beat Texas A&M.  This is ANOTHER such.

Based on what Texas A&M has done so far 2019 of playing 3 good teams and losing all 3 of those games Texas A&M will lose to Georgia and will then next week lose to LSU Thanksgiving week weekend to have 5 regular season losses then Texas A&M Aggies will lose its bowl game since Texas A&M is 18-22 bowl record.

Georgia is going to win our game against Texas A&M then win over LSU and win our bowl games – both of them this season.

Jimbo Fisher a $ 75 million 10-years head coach went 9-4 not exactly what Texas A&M prayed for.  This season is MORE of the same at 7-3 fixing to be 7-4 having to beat LSU next week not to be 7-5 before it even plays its bowl game.

Johnny Manziel that is Texas A&M’s claim to fame.

Texas A&M has one count them one Pro Football Hall of Fame player.  Sure is a lot of hype about Texas A&M now debunked by me who joined SEC 2012 and hasn’t done shit despite always having a non-conference schedule of pussies.

Better than Mississippi State Arkansas and Ole Miss this year.

Still with ALL THIS every year Texas A&M finally beats someone.  Do NOT let it be Georgia.

7-5 with losses this week and next week is NOT going to get Jimbo Fisher a raise nor even get him back to the Gator Bowl in Jacksonville again.

THIS is where we’re at year 2 of $75 million dollar 10-year contract for Jimbo Fisher.

Jimbo Fisher has got to do something.  He is feeling the heat.

UGA is the # 1 mascot in the country.

This is an aggie ?

I didn’t know that.

All this time I thought this was Lassie. 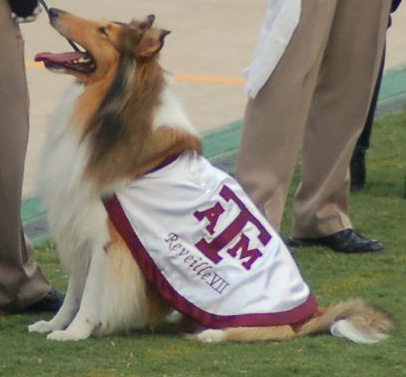 That is not a mascot.

Thank you Kirby for the talent on this team as Mark Richt certainly was not near # 3 the year 2020, # 2 the year 2019, and # 1 the year 2018, and # 3 the year 2017 in recruiting composite 247sports.com rankings. If we can do a little better passing offense than # 69 in 2018 season and # 72 Passing Offense in 2019 season, we would be right where we all want to be. Now that Jake Fromm is gone all will know why Kirby is # 72 Passing Offense really every single solitary year Kirby has been here so far. View all posts by UGA Thomas Brown